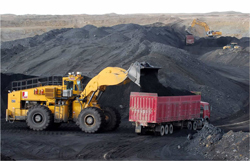 Coal is a fossil fuel. It is a  combustible,  sedimentary,  organic rock,  which is  composed  mainly of carbon, hydrogen and oxygen. It is formed from vegetation, which has been  consolidated  between other rock strata and altered by the combined effects of pressure and heat over millions of years to form coal seams.

The coal deposits in India are primarily concentrated in the Gondwana sediments occurring  mainly in the  eastern  and  central  parts  of Peninsular India, although Gondwana coal deposits also occur in the  north-eastern  part  of  the  country  mainly  in  Assam and Sikkim. The  Tertiary  coal-bearing sediments are found in Assam, Arunachal Pradesh, Nagaland and Meghalaya.

As  of  now  there  is  no  coal  mine  in  Bihar, but coal block has been allocated to BCCL (subsidiary of CIL) in Bhagalpur and process has been initiated to start the mine but it will take up to 2–3 years to start the coal production.

Coal  consumers  in  the  state  are  dependent  on coal  suppliers  of  other  states.  In order to  eliminate  dependency on handling  agents, the Company has signed an Agreement with a Project Management Consultant (PMC) to facilitate coal e-distribution in the state.

With the  help  of  PMC,  digitization of coal distribution will benefit MSMEs and other consumers significantly, making the process transparent and efficient.  The  platform  developed  by PMC  will  make  it easy for the Company to manage coal distribution and eliminate dependency on handling agents.

Details of coal consumers, allotment and lifting for the financial year 2021-22.

Details of coal consumers, allotment and lifting for the financial year 2020-21.

Details of coal consumers, allotment and lifting for the financial year 2019-20.